Fur trade has long harbored in Veles, Veles furs were widely know. In the mid 19th century, Veles became the most important commercial center in Macedonia. 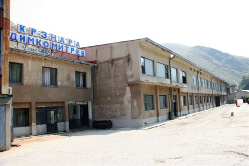 As craft experienc a steady increase in Veles sprouting manufacturing of small workshops. In that period, among other manufacture the workshop of family Zarezankovi worked successfully. Besides the three brothers George, Angel and Kirov there were self-employed and hired workers. The primitive way of tinning skins, then dried out in the sun and at the end making various products of them.

On May 29th decision was made to form a company producing all kinds' fur and leather products signed by the President of the Government. Immediately after the formation, new workers were hired.

In 1952 the initiative by George Zarzenkov, was formed plant for gloves. Thus further 45 new employees were hired in 1952, and the company already counted 127 workers. The needs for increased production and growing with the help of the municipality in 1952 the company began construction for a tinning plant at the site of today's AD "Dimko Mitrev." In 1954 the plant was built for apparel, upgrade the tinning plant. In 1962 counted 142 plant workers. In 1963 the plant fell into crisis and ugly was off 50 employees. The remaining workers were in a crisis situation and received a minimum salary.

The reforms began in 1966 and rapid growth of the labor organization. The director EST name graduated economist Andrea Kovachev. So in 1970, 1972, 1973 has been committed to expanding the plant and apparel the tinning plant and had received new employees. So in 1979 the number of workers has increased and was 350, of the total production and 40% are placed on the foreign market.

The decree of the President of SFR Yugoslavia on 17.4.1978 on the occasion of 30 years of existence, the special merits and successes achieved in the operations of importance for the economic prosperity of the country, the organization was awarded the MEDAL of labor.

In 1979 employees experienced another victory. It was put into operation new apparel factory which allow for increased production.

In 1985 a new factory was built. It started to work on 2nd June 1986. In the period 1980-1985, the number of employees grew; the demand for Fur products in the market was increased. Fur products have won not only domestic but also foreign markets. Car covers, Hunter, and other fur products are well sold to markets in West Germany, Switzerland, Poland and many other countries.

From the year 1986-1990 were invested significant funds for the replacement of machines from the tinning plant for ready-made machinery and machinery for equipping the line for development of small businesses. The plan provides for the production output to grow at a rate of 8.7%. The number of employees in 1987 amounted to 502 employees.